The human genome codes for 48 members of the large family of ABC proteins. Most members are membrane exporters, while four are involved in gene expression regulation. Common to all ABC transporter are the nucleotide binding domains, which provide the driving force by hydrolising ATP. A lot of structural information is now available for the ABCB subfamily, as crystal structure of several member have now been solved. The full transport cycle will require characterization of the dynamics, as e.g. accessible through molecular dynamics simulations.

We focus on P-glycoprotein (ABCB1, P-gp), which is a defence system evolved to prevent xenophobic substances form entering our body. It is expressed at barrier tissues including kidney, intestine, blood-brain-barrier, placenta, as well as liver. P-glycoprotein is known to intercept thousands of different, often structurally unrelated, hydrophobic compounds within the cell membrane. P-glycoprotein or breast cancer resistance protein (the second defence ABC transporter) are often upregulated in cancer cells, where they alone or in tandem confer resistance to chemotherapy. The second ABC transporter in our focus of interest is the bile salt transporter (BSEP, ABCB11), which shares 49 % sequence identity with P-glycoprotein, but shows a very narrow substrate spectrum, limited essentially to bile salts.

Several conceptual substrate transport models have been developed. They agree in that ATP-binding and hydrolysis powers the transport cycle and that the conformational changes in the NBDs are transmitted to the TMDs, inducing a conformational transition from the substrate-binding inward-facing to the substrate-releasing outward=facing conformation. A molecular detailed transport model would be highly desirable. Structural differences corresponding to the high and low affinity states for substrates, the occluded state as well as solute uptake from the membrane have to be defined yet.

Crystallization of ABC exporter prepared the ground for modeling P-glycoprotein. Some uncertainty with respect to the physiological conformation of the transporter remained, as the structures and models are typically not fully in line with all biochemical evidence. During crystallization, the transporter is extracted from its native membrane environment and solubilized by surfactants. This procedure might have influenced the conformation of transporter and lead to the structures observed in the crystals. We developed a model of the P-glycoprotein in the ATP-bound state [Stockner et al. 2009] and modified the model conformation by making extensive use of experimental cross-links determined by the group of D. Clarke, resulting in a model that is in line with all experimental data. We recently characterized the binding site of propaphenon like substrate and found that substrate can take two distinct routes while moving through the transporter. 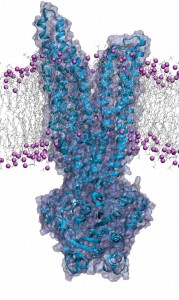 We aim to develop a transport model with atomic details that describes structures and conformational changes associated with the transport cycle. Computational studies we be paired with experiment carried out within the framework of the SFB35 (http://www.sfb35.at)