Neurotransmitter:Sodium Symporter (NSS) are a group of transporters, which are mainly located on presynaptic neurons and glia cells. Their core physiological role is termination of neurotransmission by rapid removal of neurotransmitters from the synaptic cleft. The SLC6 transporter family comprise the monoamine transporters for dopamine (DAT), norepinephrine (NET), and serotonin (SERT), the GABA transporters (GAT), as well as amino acids (glycine, aspartate and proline) and osmolyte (betaine, taorine and creatine) transporters. These transporters couple substrate transport to ion gradients of sodium and chloride, and are able of accumulating substrates up to 100 fold.

Disregulation of their normal function is associated with disorders like depression, attention deficit hyperactivity disorder, autism or bipolar disorder. A number of drugs, which target NSS, have been developed for treatment; however, illicit life style drugs like cocaine, amphetamines and ecstasy also interfere with normal transport function.

Determination of the structure of the bacterial homolog LeuT from Aquifex Aeolicus and recently of the drosphila melanogaster DAT transporter have provided considerable new insight in structure and function and represents a starting point for applying structure based methods to investigate NSS function with atomic resolution. A wealth of biochemical and pharmacological data is available, which allowed for characterization of several aspects of NSS function. The research environment at the Institute of Pharmacology allows to carry out experiments designed to proof predictions from modeling and simulations in-house.

The NSS transporters are a classical example of a membrane transporter, which uses alternating access to shuffle substrates across the membrane. In their ground state they present a substrate binding site towards the cell exterior located midway through the membrane. A conformational transition occurs after ion and substrate binding, whereby the path to the cell exterior closes, while a new passage is opened towards the cytosol and substrate can be released. 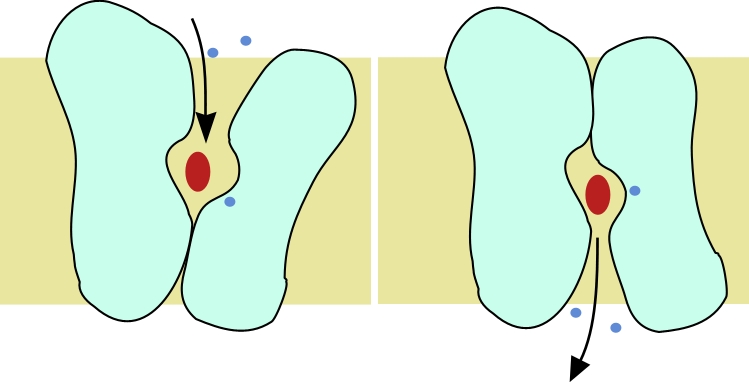 Determination of the structure of LeuT from Aquifex Aeolicus and later the DAT from drosophila melanogaster have opened a window to model the structure of the human NSS. The LeuT structures deposited in the PDB are bound to different ligands, and have now been observed in the outward-open, the outward-occluded and the inward-open state. We created models of the human NSS transporters based on these structures and tested them using molecular dynamics simulations in a physiological relevant membrane environment. 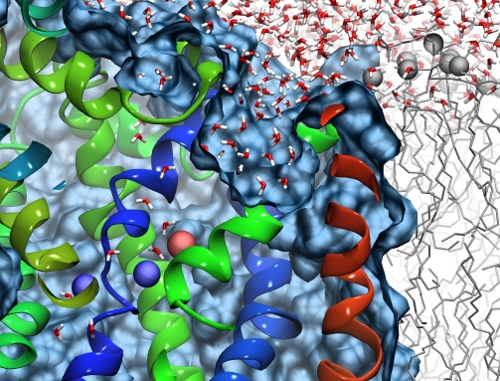 Several projects are performed with the aim to understand the transport cycle of the  NSS transporter.

Complementarity between experiments and modeling is enforced in all projects, which are carried out within the Institute of Pharmacology or in the the framework of the SFB35.